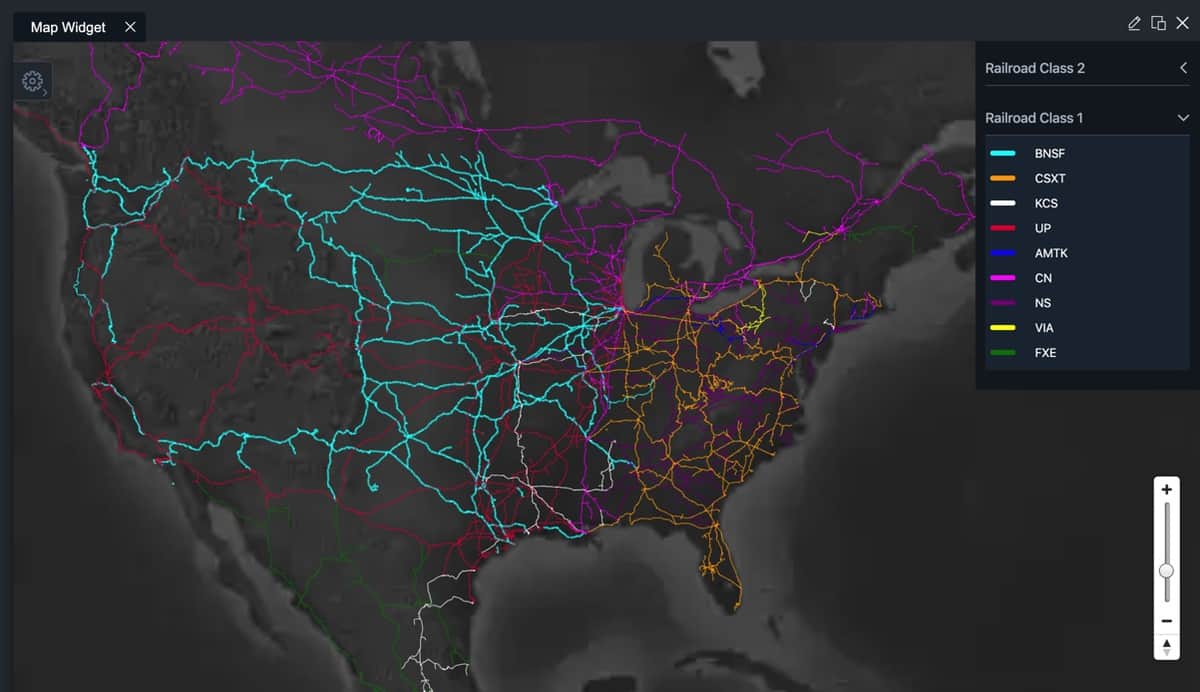 Keep trains running and your freight moving with SONAR’s advanced collection of intermodal and rail data.

Some of SONAR's deepest datasets can be found related to rail. Whether it is volume, rates, speed, or derived indexes, SONAR is constantly updated with new rail datasets. To check out the latest, click here.

A sample of the rail data offered:

Inbound and outbound summed tariff rates and fuel surcharges are a set of indices broken down by commodity, as well as a sum of all the commodities which show the tariffs a rail line charges for a specific train type and grain type. The tariff rates and fuel surcharges are for specific routes, or origin destination pairs, as well as markets. For more information click here.

Rail market share (inbound/outbound): The portion of container shipments on railroads to/from a particular market during the prior seven days. This information is broken down between loaded and empty railcars.

Dwell time and train speed: A set of indices broken down by commodity, as well as a sum of all the commodities. Dwell time shows the amount of time a train waits at its origination point for that specific commodity. Train speed shows the average weekly speed in miles per hour, for a train carrying the specified commodity. More info click here.

Rail or truck? It’s a question that’s asked everyday. Neither operates independently of the other, and with SONAR, you can know more, faster. Volumes change, demand fluctuates, and your costs used to be along for the ride. Now there’s no more guessing. SONAR’s comprehensive intermodal and rail data, which includes costs, volumes, capacity and rates, will help you serve your customers like never before.

SONAR offers weekly intermodal spot rates and daily maritime container shipping spot rates. Intermodal has been growing consistently in the freight industry and had a record amount of shipments over the rails in 2018. The intermodal sector has a strong correlation with the general freight market and how well it is performing due to the fact much of the freight coming into the U.S. internationally is shipped in a container either on the ocean or via rail. SONAR users will have door-to-door spot rates to determine how to ship an intermodal container in 39 of the largest volume lanes in the U.S

Intermodal 53' dry-van rates: The average weekly intermodal spot rates for 53’ dry van on most origin-destination (OD) pairings are all-in door-to-door rates. SONAR users can see the weekly average for all OD pairings or specific OD pairings such as Los Angeles to Chicago, as well as the change in spot rates weekly, fortnightly, monthly, quarterly and yearly. More info click here.

SONAR offers unprecedented visibility to intermodal container and trailer on flat car volumes, broken out by outbound and inbound markets as well as lane. This index provides weekly volumes of all major intermodal rail markets in North America, including the U.S., Canada and Mexico. More info click here.

The Panama spread measures the difference between the all-in rates to ship goods from China to the Midwest through West Coast ports or East Coast ports. Specifically, we combine daily maritime container spot rates and weekly intermodal spot rates to compare the costs of moving freight from China to Chicago on different lanes.

The intermodal-adjusted Panama spread is of interest to beneficial cargo owners, freight forwarders, NVOCCs, railroads, intermodal marketing companies, and port authorities that are trying to decide how to import Asian goods into the center of the United States or that are competing for import business.

Ready to Become a rail and intermodal freight forecaster?

Find out how to get rail and intermodal data at your fingertips – fast.