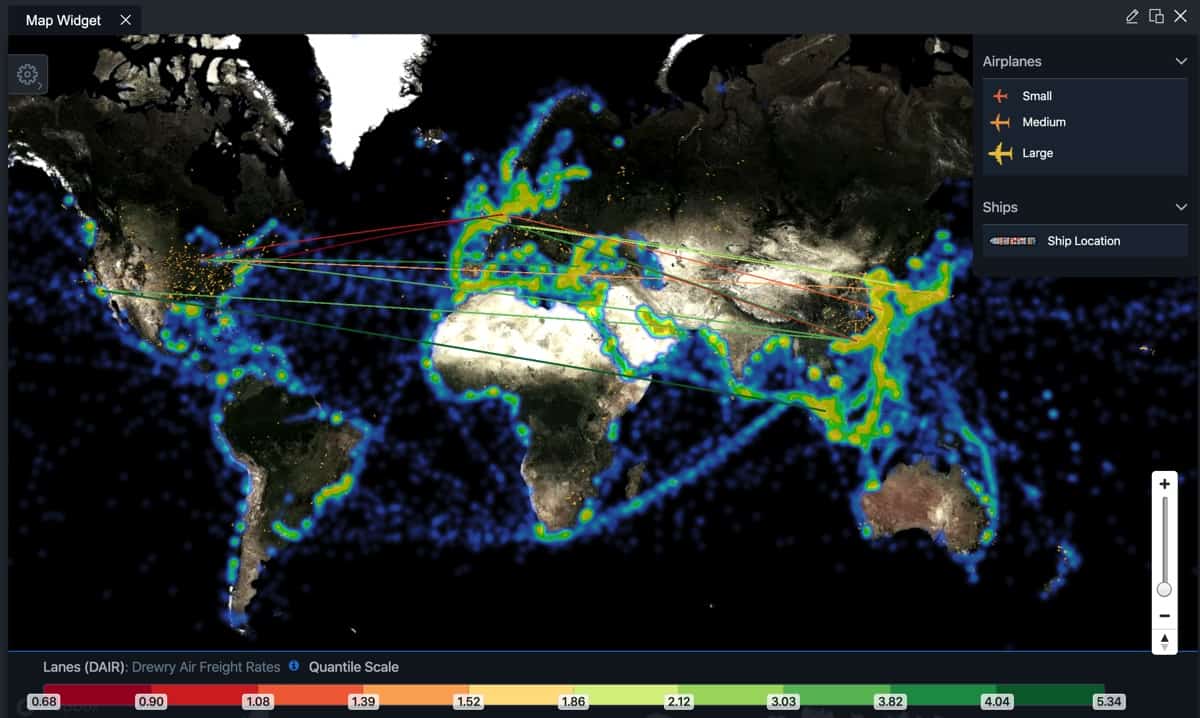 SONAR arms those involved in global supply chains with the intelligence they need to make faster and smarter decisions regarding capacity, rates, trends and forecasts in markets around the world. WIth SONAR, users have access to the largest data repository and most advanced geo-based mapping UI that has ever been brought to market. This enables users to fully exploit the potential of benchmarking their in-house data alongside data from the rest of the industry across all modes of transportation.

In SONAR, you have access to real-time location information for 100% of the world’s ocean and air cargo assets via the most advanced satellite and GPS tracking on the market. While monitoring 100% of capacity, users can drill into demand-side data sets that only SONAR has organized in one place, enabling users to catch trends in demand that can provide an edge in the market, or provide users with leading indicators of imbalances in supply and demand that will affect their operations. Having access to SONAR provides users the competitive advantage and risk management capabilities they need to gain an edge in the market while simultaneously de-risking their supply chains.

SONAR is truly a multi-modal near-time freight market dashboard, and includes daily volumes for intermodal containers moving within and between freight markets in North America – including bi-directional container volumes between the U.S., Mexico and Canada.

SONAR will also display the inbound and outbound container volumes by both load status (empty/loaded) and length of the container (20’, 40’, 45’, 48’ and 53”) between major freight markets. Combined with weekly intermodal spot rates on 105 origin-destination pairings, this will give SONAR users an unprecedented view into the intermodal freight market.

In the U.S., intermodal represents about 46% of all railroad traffic each week and for shippers, brokers and carriers, it represents a competitively priced capacity alternative, especially in the long-haul freight sector where supply chain flexibility allows longer lead times. Intermodal also allows railroads, ocean carriers, trucking companies and intermodal marketing companies (IMCs) to take advantage of the best attributes of various transportation modes from within SONAR to yield an efficient and cost-effective overall freight movement for customers.

How will SONAR users benefit? SONAR’s intermodal tickers will also allow SONAR users to better understand the volume of containers:

Users will also be able to measure capacity or when demand is exceeding supply as well as general rate increases. When volumes surge in maritime lanes, as with trucking, the rates also increase. Increasing rates can be a leading indicator for increasing freight volumes entering the U.S., potentially creating market disruption.

The Drewry World Container Index represents the average weekly spot rate for shipping a 40-foot container in seven of the United States' largest maritime shipping routes. SONAR users get  insight into lane-specific rates in the following:

The Freightos Baltic Daily Index measures the daily price movements of 40-foot containers in 12 major maritime lanes between countries. It is expressed as an average price per 40-foot container. This index is the world’s only ocean container pricing index that is reported daily.

In addition to average daily prices across 12 major maritime lanes, the difference between FBXD.CNAW and FBXD.CNAE is offered as FBXD.PANA. This is the price differential between shipping a 40-foot container from China to the North American West Coast and the North American East Coast.

The Panama spread reflects a simple calculation – we subtract the rate to move a container from China to the North American West Coast (FBX.CNAW) from the China to North American East Coast rate (FBX.CNAE). The trans-Pacific trade lane is one of the world’s busiest and most volatile, and container rates are affected by steamship line capacity, demand and canal fees (both Panama and Suez).

In addition to the Panama spread (FBXD.PANA),  there is another version that includes intermodal spot prices to the major Midwest market, Chicago, so that shippers, freight forwarders and intermodal marketing companies can get a better read on the competitive landscape.

IMSPRD.PANA measures the difference between the all-in rates to ship goods from China to the Midwest through West Coast ports and East Coast ports. Specifically, we combine daily maritime container spot rates and weekly intermodal spot rates to compare the costs of moving freight from China to Chicago on different lanes.

The intermodal-adjusted Panama spread is of interest to beneficial cargo owners, freight forwarders, NVOCCs, railroads, intermodal marketing companies and port authorities that are trying to decide how to import Asian goods into the center of the United States or that are competing for import business.

SONAR offers the deepest set of customs data in the market, provided  by lane, port or commodity.

The Drewry Global Container Port Throughput Index is a growth/decline index representing ocean container trade volumes at 220 ports around the world. This is an indicator of whether global shipping container volumes are growing or declining at major ports worldwide. If the index is growing we can assume that global trade is expanding and greater volumes are flowing between ports. If it is declining, we can assume that global trade is slowing and fewer ocean containers are moving between ports.

Ready to use global trade data to develop freight forecasts?

Find out how to get freight data at your fingertips – fast.