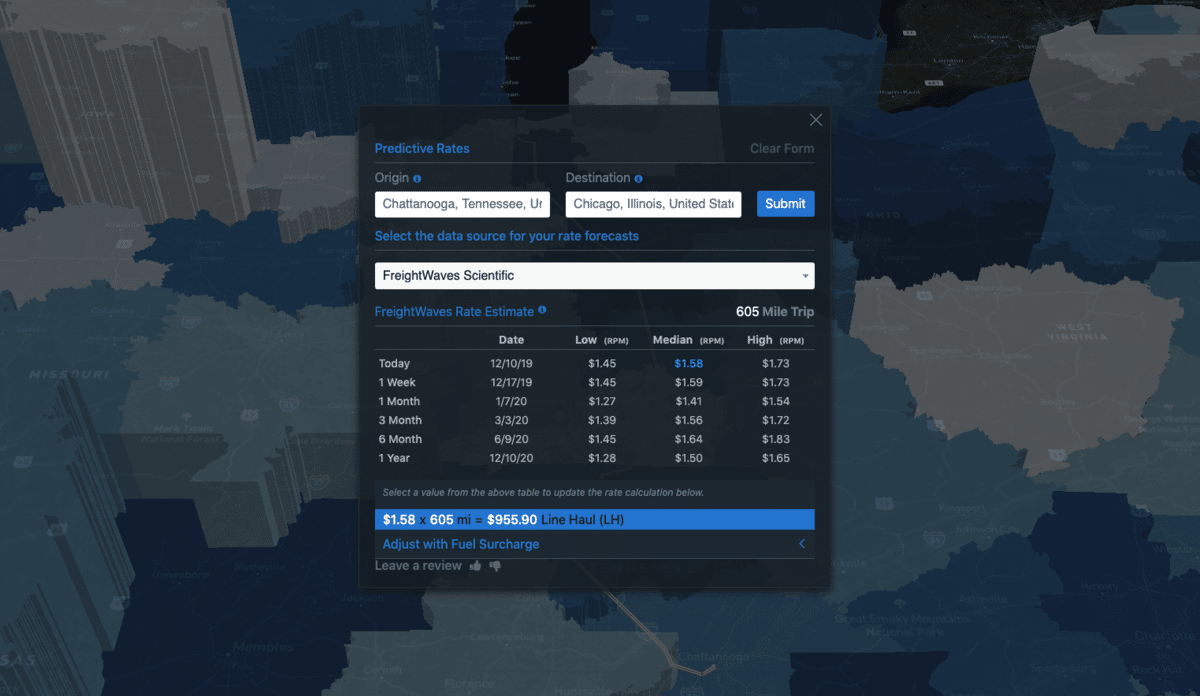 Traditional freight and trucking rate products tell you where the market has been. SONAR picks up where they end and provides forecasts of where rates will go. Imagine the power of knowing where rates will head in the future – perfect for managing freight RFPs and RFQs. SONAR's predictive rate tool uses market data and artificial intelligence to forecast freight rates for today, next week, next month, next quarter, six months from now or next year. The predictive rates widget calculates the mileage and shows a total with or without fuel surcharge.

And the tool will also provide predictions and forecasts of a customer’s own rates.

Since FreightWaves introduced SONAR in May 2018, load tender indices have become a major topic in the transportation space. For the first time in history, freight market participants had the ability to monitor the health and activity of the freight market in near real-time (<24 hours).

Tenders are actual load offers, which is why they are far superior to any other indicator of health, demand and capacity in the trucking and freight market. Tender indicators lead spot rate movement and by tracking them, you can start to forecast spot rates, capacity and demand. Economists and analysts can use tenders to monitor the economy and build forecasts for economic health and activity.

Before explaining how to use tender activity, a few terms are defined that will be help you realize the most value by incorporating these indicators in your business:

Tender lead time: The time in days between the original load tender and the first pickup time and date. This measure can indicate several conditions. Higher tender lead times (longer time in days) are a strong sign that shippers are comfortable with their contracted capacity providers. It is also predictive of near-term future load volumes. Lower tender lead times (shorter time in days) indicate that shippers are beginning cover loads with spot market capacity. It also indicates that load volume pressures are more immediate.

Tender market share: The percentage of the national load volume that a specific market represents, during a specific time period. Time series studies of this index can provide valuable insights into emerging markets and shifts in freight flow patterns.

Tender volume: The total volume of tenders in a given market. Volume can be described in an index or actual load count. Tender volume is an extremely useful index to determine the effective strength or disruptive nature of the tender rejection movements or volatility.

Routing guide: A routing guide is prepared by a shipper to inform its routing staff on how to best route specific shipments of freight between modes and carriers. A routing guide informs the person or computer system executing the load how the transaction should be routed between carrier and mode on a specific lane. The routing guide will rank preference of carrier by service and rate on a lane.

Waterfall: The order of how freight is routed by the shipper on each lane.

When FreightWaves introduced SONAR, we knew the best way to predict spot rate movement was to watch the contract trucking market and carrier activity in that market. After all, the largest carriers tend to bid on loads through formal bids given by shippers and are given first right of refusal on a set number of loads for a given lane. Shippers tend to prefer the larger enterprise carriers and will give them preference in their bids and in the routing guides.

The best way to monitor the contract market is to look at tender rejections. Tender rejections indicate an electronic refusal of an actual load request from a shipper to a carrier. A carrier that rejects a load indicates that it had other options with its capacity and was not willing to offer available capacity for a given load. It can also indicate that the volume of load tenders exceeds available capacity.

Regardless of the rejection reason, one thing is clear – the carrier is communicating that it isn’t willing to take the load offer. We cannot learn about the state of the market from a single shipper or carrier. It is also hard to look at a single shipper's or carrier’s rejection rates and draw conclusions about the state of the trucking market or movement in trucking rates.

But when applied over a large set of carriers and shippers, across an entire market, we can learn a great deal. At scale, the shipper- or carrier-specific anomalies become nearly irrelevant. The fragmented nature of the market is such that a single firm doesn’t have that much impact on others. A shipper that has a high rejection rate on a given lane does not indicate a capacity shortage in the market, but if this is a trend for multiple shippers, it likely means something is structurally wrong with that lane. The issues could be short-lived (i.e. a produce harvest) or longer term. If they are short-lived, rates may trend upward. If they are longer term, shippers will lock in higher contract rates on the lane.

Things get even more interesting when we look at tender rejections at a market level. When capacity has become more scarce in an entire market, rejections will increase. This is because in every single market, a portion of the capacity is destination-agnostic. In other words, carriers don’t have a preference of destination for their trucks and are willing to take loads to anywhere. Once this discretionary capacity leaves the market, shippers will scramble for trucks and will be willing to, or forced to, pay much higher rates for trucks.

Routing preferences from first position to last are often called the routing guide waterfall. The order of carriers in a shipper’s routing guide  is often based on which carriers can meet the service requirements of the load and then by price. Usually, a shipper will use service requirements as a filtering mechanism to include carriers that can perform on a lane before considering price. But once they have made the initial selection, carrier order is often dictated by the lowest price carrier on that lane.

Once the top carrier in the routing guide (in terms of order) rejects the load tender, the second carrier in the guide will be chosen. If it also rejects it, the shipper will go to the third position and so on. If the routing guide completely breaks down (all carriers listed reject the load) then the shipper will often go to the spot market to secure capacity. This freight will end up being offered to a select number of brokers the shipper has chosen to do business with.

This is the reason that load board-driven freight data is heavily skewed and you see extreme flips in the load-to-truck ratios that are not truly representative of market conditions. In order to truly understand market activity, you should look at actual loads that have been tendered and avoid using load board data alone.

To describe this process of how tender rejections predict rates in a market, FreightWaves created  the Freight Market Waterfall Theory, which is outlined below.

If a market is decelerating (tender rejections are falling), spot rates are likely to fall until they hit the market floor.

The market floor is equivalent to the collective operating cost of carriers. At this point, rates are unlikely to fall further.

If a market is flat (tender rejections are near zero), in the short term there will be continued downward pressure on spot rates until rates hit the market floor.

If a flat market continues for more than a few months, contract rates are likely to fall towards the market floor.

If a market is strengthening (tender rejections are increasing), there will be upward pressure on rates. There is no ceiling on rates, but if rates stay high for an extended period of time, new capacity will enter the market.

How SONAR uses The Waterfall Theory to Create Predictive Rates

SONAR tracks routing guide compliance by tracking tender rejections and other data to determine if routing guides are likely to break down in the near future. This data is then compiled and compared to other data sets, including financial and operational data from hundreds of carriers, brokers and shippers.

Then we built an algorithm that multiplies the base rate against the tender rejection data to get the current market condition rate, using historical market spot rates.

The rate for any given lane is determined by both the origin and destination; the price of a truck has as much to do with the attractiveness of certain destination markets as it does with the availability of trucks in a given origin market.

Adjusting the base rate by conditions in those markets gives the FreightWaves data science team a  model of “today’s rate” by origin/destination pair.

Today’s rate is then forecasted out a year by looking at the historical rates and future direction of the market, using SONAR data from thousands of sources. The rates adjust for seasonality variations in the model and other financial and operational components.

The model also becomes smarter over time as more data is fed into it. Significantly, our models for each market interact with each other, so for example, a surge in volume in Atlanta will affect how we think about the availability of capacity out of Macon.

Find out how to get freight rate data at your fingertips – fast.